The mega expensive, super luxury high rise “asparagus tower” condos that have blighted the Manhattan skyline over the past dozen years, are now being rejected by buyers – big time.

While it’s true that real estate prices nationwide have declined during the booming “Trump economy”, these particular residential buildings, with their high-level finishes and endless amenities, have taken a disproportionate hit.

After the initial buyer interest in this novel form of architecture faded, many developers failed to heed the message that the same buyers who were wowed by the seemingly endless views also felt uncomfortable at the prospect of actually living in the space.

Why? It was obvious looking at the faces of the prospective buyers as they zoomed upward on the super high speed elevators to the 60th or 70th floors, their ears popping all the way. A client told me that she felt that she was taking off in a Learjet. 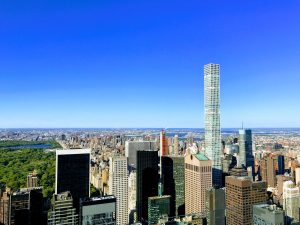 Once they stepped into these apartments with their tall rooms and floor to ceiling windows, the sensation of floating in the sky with no barriers to keep them from descending into some unknown abyss was an uncomfortable if not terrifying sensation. This feeling was compounded by the constant view of clouds passing by and the frequent white-outs which completely obscured their view of anything other than the white cottony surroundings, which gave them a claustrophobic, light-headed sensation.

Needless to say, in the subconscious of potential buyers, there was also the memory of 9.11.2001, when terrorists crashed their suicide missions into the World Trade Center. One visitor to these new, ultra high skyscrapers, told me that she felt a terrible sense of vulnerability. If a plane or helicopter accidentally crashed into their building, it might well snap off the top floors leaving them no way to escape.

At prices starting at $3,500 to over $6,000 per square foot, it is reasonable to expect that this category of high-end home shopper would reject these properties. Why haven’t developers gotten the message?