When state governments attempt to rectify a problem with blanket legislation, there are often unintended negative consequences. 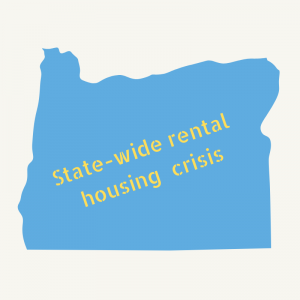 Senate Bill 608 is just such a law. Well intended but poorly drafted, this bill will do little to remedy the state-wide rental housing instability crisis and is likely to increase homelessness because of a statewide cap of approximately 10% annual increases on rents.

The fact that the State of Oregon does not have any laws on the books permitting the rights of individual governments to regulate rent increases is unfortunate and should be addressed. In other states, however, the amount of rent increases are determined by local governments, who are in a better position to access the supply of existing housing in their region and the impact of rent increases on the local economy.

Having a state-wide blanket permitted annual increase of 7% plus a Consumer Price Index, (CPI), increase which usually ranges +/- 3% is excessive and would bring permitted increases at the conclusion of a one year lease to approximately 10. This would put the continued cost living in an apartment out of the range that the majority of renters could afford, which negates the whole purpose of a “rent control” law.

Furthermore, the provision that any of the rules governing this proposed legislation only apply to rental buildings that were built longer than 15 years ago render any benefit to the larger renting population null and void. One must ask, with a provision like this, why even bother pursuing such legislation?

A meaningful State “rent stabilization” law which benefits both the landlord and the tenant must include a statewide mandatory provision that the landlord must offer the option of a one or two year lease to tenants, with the second year option rent increase tied to the CPI from the previous year. Subsequent leases with this tenant would also be based on CPI annual increases, plus any tax, fuel increases, and the cost of necessary improvements, which are in excess of the CPI. This provision would guarantee that the landlord’s profit margin would remain stable with existing tenants in place.

Upon vacancy, provided it is not brought about by no-cause evictions, the landlord would have the right to increase the rent to reflect market conditions and charge whatever the current market would bear.