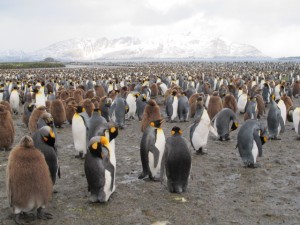 The simple and pragmatic answer is the wildlife: most especially the penguins – hundreds of thousands of them in every species imaginable and the seals and the whales in the Antarctic waters.

As far as humans are concerned, the Continent of Antarctica and the adjacent areas are a Title Insurance Company’s nightmare! There are seven countries who have asserted territorial sovereignty claims to this region during the first half of the 20th Century, based upon the great period of discovery of the region: the United Kingdom, New Zealand, France, Norway, Australia, Chile and Argentina. The exploratory endeavors of Shackleton in 1907 and Admiral Byrd in the 1930s are just a few of the more well known of these expeditions.

The International Antarctic Treaty of 1959 protects the area for scientific studies and prevents any territorial claims from being effectuated. Signed by 42 countries, it preserves the environment and prevents further land claims during its duration. Nevertheless, Argentina and Chile have attempted to solidify their sovereignty by insuring that citizens of their countries gave birth to infants on their scientific stations in the 1970s and 1980s. Since then, pro-creation on any sizable scale there has once again reverted to the penguin population.