Having cut their teeth on residential projects in waterfront areas in Brooklyn and New Jersey, the Toll Brothers, continued to play Monopoly with additional Manhattan purchases. A publicly traded company who consider themselves one of the largest US developers of luxury multi-family residences, the Toll Brothers seem unafraid of building sites that have been shied away by others partially because of the difficulties involved in site development.

Their first Manhattan development was at East 64th St and Lexington Avenue, involved assembling a corner site by buying up adjacent townhouses. The completed development, called the Touraine is now fully sold out. The quality of the finish was significantly higher than their previous developments as they hoped to make this their flagship Manhattan project. It was well received. 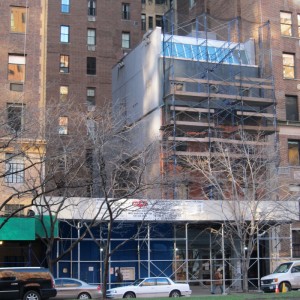 In the meantime, the Toll Brothers acquired two mid-block Park Avenue townhouses on Park Avenue between East 89th Street and East 90th Street. Their development plans, which required new interpretation of the zoning laws and overcoming much disgruntlement on the part of the residents of the Carnegie Hill neighborhood, delayed demolition of the existing structures for a number of years. Some of the apartments in the adjacent structures required sealing up existing windows in these luxury pre-war cooperatives thereby diminishing their value. Nevertheless, the Toll Brothers plodded on. One of the townhouses has been demolished and the remaining one is due to begin demolition in a few weeks, after which the excavation will begin. Developers with deep pockets who can afford to wait and hold, seem to be the ultimate profit takers in Manhattan real estate.

At the end of 2012, the Toll Brothers took advantage of a seller’s desire to close before the end of the year, to get a good deal on a 200,000 square foot site at 76-86 King Street in West Soho, formerly known as the “Printing District”; they paid $56.5 Million for this site, or just under $300. per buildable square foot. Again, some re-zoning of this former manufacturing district is required, however the local community board has given its thumbs up approval to the re-zoning.

In addition, the Toll Brothers purchased the somewhat troubled site at 961 First Avenue for $64 million. It is located on the corner of East 53rd Street, across the street from the “Grand Beekman” condominium that was successfully developed by Alexico in 2003.

These motivated sellers were anxious to conclude these sales to avoid potential higher capital gains in 2013.

Lesson learned: He who has deep pockets can afford to take advantage of good opportunities. As a result of their successful acquisitions, the Toll Brothers may not have grown in popularity but their stock has increased in value by 13% in 2012.